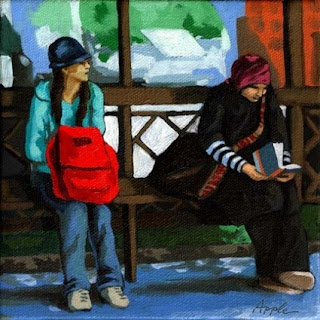 On Sunday afternoon I set out to collect a second hand bike that I had paid an elderly gentleman for the previous day.  He lived in a flat that was part of a large subsidised housing block in a new suburb on the outskirts of Haarlem. I suspect that the block was constructed during the ugly 1980s, for it was totally devoid of any charm.  What it lacked in charm, it seemed to have replaced with a lively street scene, busy with dark haired children shooting hoops, riding bikes and running amok.

The walk to this outer suburb had taken me over an hour.  Along the last section of the journey, a woman waiting at a bus stop interrupted me to ask the time.  She was later middle aged, with a head of faded rusty hair, and the face of someone who had experienced many hard days.  Upon hearing my botched efforts at speaking Dutch, she put her hand on my forearm and asked me where I was from. Her delight at finding a similarly displaced soul was obvious.

In five fast minutes, she told me that she was from Budapest.  She had moved to the Netherlands when Hungary offered her nothing more than a life of hardship and poverty.  Her Dutch was perfect, at least compared to mine, yet she was easily identifiable as a fellow allochtoon – someone not Dutch, an alien.   We had a familiar conversation about boring local food, missing family and friends, and that nebulous feeling of not really belonging.

It was that feeling that connected two strangers on a bus stop.  The bus arrived and I waved her goodbye as she boarded, plonked on a seat and smiled at me through the window.  I continued on my journey to collect the bike, feeling very human.
Posted by Ana at 02:14