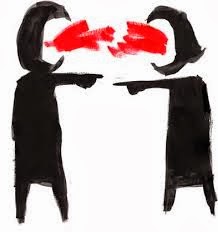 Last month there was a story in Dutch newspapers about a local punter charged with insulting the policeman who confiscated his can of beer. For his insult of choice: “mierenneuker” or “ant-fucker”, the man was fined 250euros. Seriously. Even in this passionless country, throwing "ant-fucker" as an insult is ridiculously lame. I suspect the judge gave the fine to punish the guy for being pathetic.

The art of swearing, cursing and verbally insulting someone is culturally dictated. For example, Italians are masters in the field – due to the color, sound and dramatics incurred in their verbal assaults. To understand the true translation of an Italian insult, the recipient needs to comprehend both the Italian language and deaf sign language.

Actually in most cultures there exists common themes in verbal abuse. Generally these themes aim to demean a person by claiming sexual relations with the wife, sister or mother of the individual. Accusing someone of being in a sexual relationship with the family pet, is another repeated theme of abuse found in many cultures.

While these common themes are also espoused by emotional individuals found in football stadiums, bars and on the streets of Amsterdam and other Dutch cities, Dutch verbal abuse tends to focus more on inflicting cancer or some other illness on someone. So, be offended if during your next trip to the Netherlands, someone yells at you “val dood vuile kankerhoer” (translation: drop dead stupid cancer hooker). Similarly, “Ik laat een scheet in jouw richting” (translation: I fart in your direction) – although you should probably put some distance between you and your abuser in this instance. Taking offence should be short-lived though – as translating the assault should remove all sting intended, and identify the abuser as a pathetic fool.