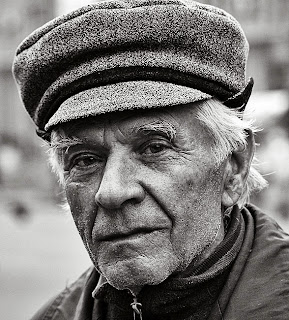 There is a strange old man sitting at the table opposite me.  He seems to be chewing his cud, making his sparse moustache rhythmically bounce up to conceal wide nostrils.  The loose skin below his eyes sits in overlapping layers that continue down his face and neck into his grey sweater.  He was wearing an Andy Capp hat, now removed to expose a shiny pate fringed by the remaining vestiges of a former hairstyle.

We are both in the hospital cafeteria.  It is a dull place with fluorescent lighting and an uninspiring menu.  I am typing on my laptop and he is waiting for the coffee and sausage rolls that his female companion is bringing to share with him.

He watches me.  His expression gives away almost nothing, although I guess that he is either concerned or fascinated by my activity.  The strange noise he emits as he eats is distracting.  We continually sneak glances at one another, seeking more information or more evidence about the other.

His female companion, most likely a long-term spouse based on the lack of conversation between them, cuts his sausage roll in half.  She looks like a man.  Now finished with her own sausage roll, she has started on his.  He goes with it, without complaint. Finishing what remains on his plate, he takes out a large handkerchief, honks his nose and wipes his forehead. They continue to sit without speaking, although the space between them is not quiet.

Now ready to leave, she busses their tray while he redresses in his coat and hat.  Looking my way, he offers a farewell squint in my direction before exiting.